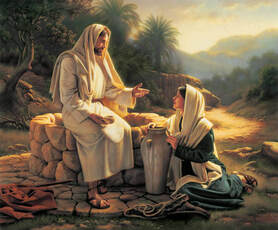 Jesus is Living Water
The World Health Organization says that every year more than 3.4 million people die as a result of water related diseases, making it the leading cause of disease and death around the world. Most of the victims are young children.

A report published recently in the medical journal The Lancet concluded that poor water sanitation and a lack of safe drinking water take a greater human toll than war, terrorism and weapons of mass destruction combined.

According to an assessment commissioned by the United Nations, 4,000 children die each day as a result of diseases caused by ingestion of filthy water. The report says four out of every 10 people in the world, particularly those in Africa and Asia, do not have clean water to drink.

Resources analyst Erik Peterson, of the Center for Strategic and International Studies in Washington, describes the water crisis this way: "At any given time, close to half the population of the developing world is suffering from waterborne diseases associated with inadequate provision of water and sanitation services," Mr. Peterson explained. "There are about four billion cases of diarrhea disease per year, resulting in about one or two million deaths, some ninety percent of which, tragically, are in children under the age of five."

Analysts say eliminating disease and death due to unclean water and poor sanitation would reap billions of dollars in health and productivity gains.